Examine the different methods of eviction in Missouri, including abandonment. Attendees will learn the statutory framework and procedural requirements for bringing an these actions, and the claims and defenses that tenants may raise in response.

Robert J. Wise has practiced law in Missouri since 1975 when he graduated from the University of Missouri-Columbia Law School. He specializes in representing rental property owners and managers. He is a frequent speaker to property owners and attorneys on landlord-tenant law, collections, Fair Housing, and related areas and has spoken to Solo & Small firm regarding operating a law office from home. From 1999-2003 he was the executive director of the Missouri Apartment Association. He also currently serves as the executive director of Mid-America Crime Free which educates landlords and managers about crime prevention in rental housing. 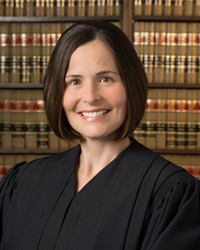 Associate Circuit Judge Janette K. Rodecap was appointed to Division 29 by Governor Jay Nixon on May 28, 2014.  At the time of her appointment, she was serving as a trial team leader in the Jackson County Prosecutor’s Office.

Judge Rodecap joined the Prosecutor’s Office in 2006 as an Assistant Prosecuting Attorney.  She worked in the Street Crimes Unit for the majority of her tenure, as well as the Special Victim’s Unit.  Judge Rodecap worked to improve the relationship between the office and the community as a neighborhood prosecutor, and she implemented a new diversion program aimed at young, first-time felony offenders.  Her background also includes working as an Assistant State Attorney for the State Attorney’s Office in Fort Myers, Florida, and as Court Counsel for the Supreme Court of Palau, an island nation in the Pacific Ocean. In addition, she served as a judicial law clerk to U.S. District Court Judge Nanette Laughrey of the Western District of Missouri after graduating from law school.