In this program, attorney/songwriter Jim Jesse discusses the unique issues faced when representing an organization as a client, particularly one as unique as a musical group. in this case, Jesse uses The Beatles and Rolling Stones as examples. Picture yourself as General Counsel for the two biggest bands in the world. And there's plenty of overlap between the two bands.

Jesse uses specific fact patterns from the later portions of The Beatles' career and overlapping portions of The Rolling Stones' career to illustrate these principles, including copyright infringement, as well as:

This is the third installment of Jesse's Intellectual Property/Copyright series exploring issues lawyers may encounter when representing individual musical artists and bands. While the educational content of each installment stands alone, there are added benefits to attending all three. 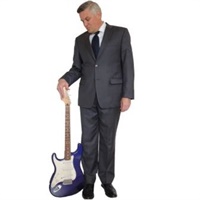 Jim Jesse has been an attorney for 24 years, and has been a full-time CLE presenter since 2013. He is the former General Counsel for Cool Music Network (THECOOLTV), which is a 24-hour music video television network.

Previously in private practice, he founded Rock N Roll Law to spread his passion for music law through his seminars.

He is also a singer/songwriter who has released two albums, is a member of BMI, and has run his own record label distributing his music. He has written songs for more than 30 years, and studied music history for nearly as long.

Mr. Jesse consults and practices in areas regarding intellectual property, licensing and music law. He has drafted and reviewed hundreds of contracts from small barter deals to multi-million dollar ones.